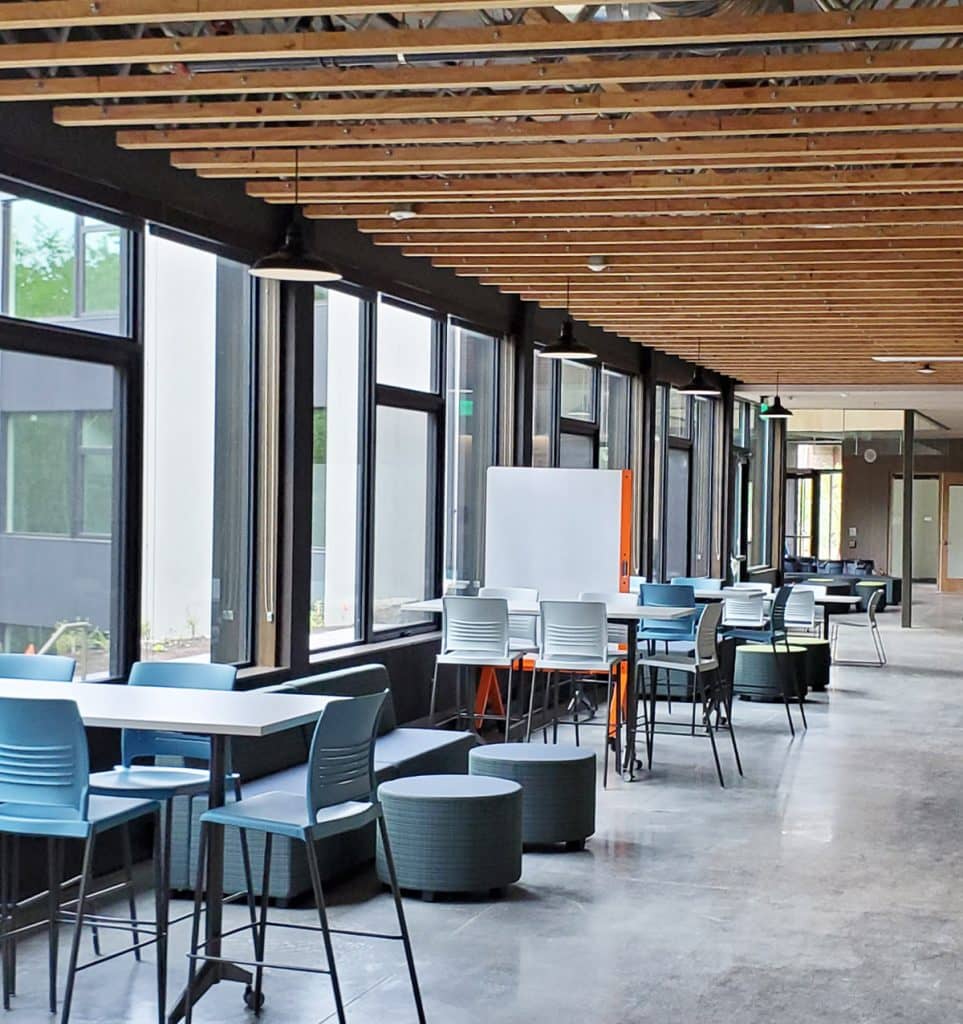 Building an Oregon school with RedBuilt roof and floor trusses

The French American International School (FAIS) was founded in 1979 in the basement of a church in Portland. There were three students and one teacher.

Four decades later, the school had evolved and acquired a 15 acre piece of land to accommodate over 500 students and 60 teachers in modular structures. As the school expanded, so did student and faculty needs, which led to a campaign in 2017 to replace the modular units built in 1998.

The first phase of that campaign would be the 29,000 square foot Gilkey International Middle School, which was designed by Hacker Architects to capture the school board’s vision: to maintain the building’s feeling of intimacy and promote the land’s natural beauty.

Stout Red-S™ floor trusses created the floor system throughout. The floor system, like the roof system, posed a particular set of challenges that Russell helped tackle when providing input on design schematics in 2017.

Principal Engineer Jerome Madden worked closely with Russell to develop a structural wood solution that would keep the space open.

Notably, however, the roof design was wave-shaped, creating an undulating interior that gave the building a unique look. The effect was created by having the bearing walls on either side out of parallel, and the slope of the roof at one end different from the other end. Designing the structural frame for such a rippling surface shape required every truss to be of a different length and designed to a different slope.

“The impression I got was that they were trying to carry the natural look of wood throughout the building,” Russell said. “And part of doing that would be to get a wood product as a structural member. The engineer, by using our products, was able to give them that as well as increased openness. With the structure being an open-web truss, that tends to not be visually constricting.”

“It’s extremely unique because no one builds a roof like that,” said Darren Lehto, RedBuilt North Pacific Region Manager.

The framing was a challenge. Russell made a point to involve Muirlands Corp., a Salem-based framer he had come to trust and rely on over time because of their forward-thinking approach in projects that require keen attention to detail.

They found the floor trusses to be just as tricky, which is a topic the FloorChoice™ Floor Performance Rating System guide helps resolve for projects like this.

“Another of the unique challenges was that they were putting three-and-a-half inches of full weight concrete on them, which isn’t unheard of,” Russell added. “But, they planned to polish the concrete and use it as the finished floor. That’s a little more unusual. Trying to minimize cracking and maximize structural integrity for the concrete and the trusses was a big deal.”

Given the nature of the building and its natural materials, there were also codes on fire resistant treating that became a part of the conversation.

The space was handed over to the school in June of 2019 after a few years of diligent design, planning, and building—the general contractor being Triplett Wellman Contractors out of Woodburn.

The structure has a low carbon footprint with natural and sustainable materials that will stand the test of time, and, just as importantly, will be a strong and open environment that will support Portland’s only international baccalaureate school for preschool to eighth grade.

“Middle school can be a tough time, and this building provides our students with their own space—a place where they can build their own community,” FAIS Board of Trustees Vice Chair Christine Chang wrote on Hacker’s site.

On top of supporting education in Oregon, the building’s material had an important impact on the local economy.

“Schools make sense built out of wood,” Lehto said. “It’s easier to find labor for a wood school because labor is more plentiful for wood projects, which means local labor is more likely to be used. It’s faster, usually, to build with wood than steel. It’s a little more flexible where changes are needed to be made. The supply cost is also less.”

From sustainable building best practices, to saving time and money on a challenging project, RedBuilt technical sales representatives are available to find the most sensible solution for your project — structurally and financially.

Learn more about each of the specified products in the project:

The architectural vision provided by Hacker Architects created a unique-shaped building set together with complex angles. Wood was selected for its economical benefits, along with the desire for aesthetic appeal with exposed material.